Museum de Fundatie has purchased one of the key early works of Neo Rauch (b. 1960, Leipzig). The painting Tal was created in 1999, the year in which Neo Rauch experienced his international breakthrough. The acquisition has been made with financial assistance from BankGiro Loterij, the Rembrandt Association (courtesy of its Titus Fund and its Post-war and Contemporary Art fund) and the Mondrian Fund. 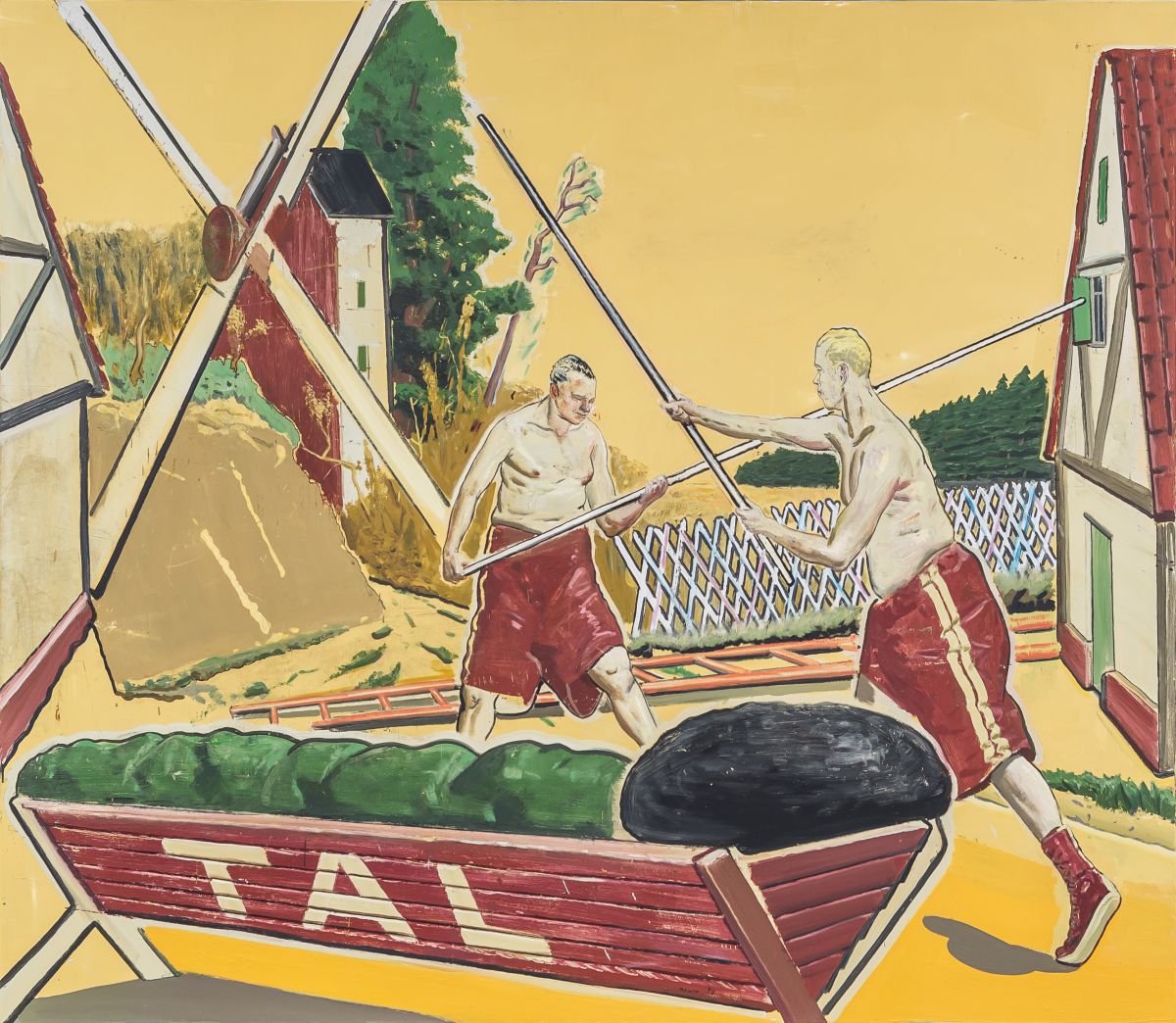 In February 1999 Neo Rauch took part in the famous ‘Armory Show’ in New York, where his work attracted the interest of Roberta Smith, a reviewer for the New York Times. She praised Rauch’s intriguing images and beautiful painting style in her review for the paper. His work was considered distinctive in the United States, largely because of his figurative visual idiom, which is based both on GDR design and cartoons and Pop Art. His participation in the New York art fair was a turning point in Rauch’s career. Prior to that he had been known mainly in Germany, but now American museums and collectors were aware of his work. This American interest assisted his breakthrough in Europe, where he received the Vincent Award in 2002, followed by a series of major solo exhibitions.

A work by Neo Rauch that had been displayed at the Armory Show appeared as an illustration with the New York Times article. This 1999 painting is also called Tal, but it is smaller than the painting from the same year which Museum de Fundatie has now acquired. Rauch made this piece after the New York show. The setting of the painting is the same, but the format is larger, the figures are more detailed (they are wearing American-style boxer shorts and sneakers) and the trough in the foreground bears the inscription ‘TAL’, possibly inspired by the containers of the huge company TAL International which Rauch had seen at the container port in New York, close to the venue for the Armory Show. The colours are largely monochrome, a reference to comic strips and possibly also to America colour field painting. The iconography of Tal contains significant references to Neo Rauch’s own life story. He lost both parents – art students aged 19 and 21 – in a train accident when he was just four weeks old. The ladder lying like rails and the windmill sails and sticks positioned like the cross of Saint Andrew are references to this. Rauch was raised by his grandparents in Aschersleben, in the former GDR, which can be seen in the landscape and the architecture.

In 2016 Museum de Fundatie acquired another work by Neo Rauch, Gewitterfront, with financial support from BankGiro Loterij, the Rembrandt Association (courtesy of its Titus Fund), the Mondrian Fund and VSBfonds. This painting has since become iconic in the Netherlands, and was the focus of the exhibition Neo Rauch Dromos Paintings 1993-2017 at De Fundatie, which drew 88,000 visitors to Zwolle. After the exhibition, three paintings were given to the museum on loan (Neujahr, from the collection of the Broere Charitable Foundation, Der Lehrling from Arthouse and Tal), and two graphic works were donated to its collection (Zeiger and Schilfer). Along with the earlier purchase of Gewitterfront in 2016, De Fundatie is now able to present a broad and in-depth view of Rauch’s work over the period ranging from Tal in 1999 to Neujahr in 2005, and on to Gewitterfront of 2016 and graphic works Schilfer and Zeiger of 2017. This gives the museum an ensemble of work by Neo Rauch that is unique not only in the Netherlands, but in the world.

Its acquisition of Tal puts Museum de Fundatie in a group of interesting museums of modern art whose collections feature work by Neo Rauch, including Hamburger Bahnhof-Museum für Gegenwart in Berlin, Museum Ludwig in Cologne, Pinakothek der Moderne in Munich, the Museum of Contemporary Art in Los Angeles, Denver Art Museum, the Solomon R. Guggenheim Museum in New York and the Metropolitan Museum of Art in New York.

Museum de Fundatie acquired Tal for €650,000, with the support of BankGiro Loterij, the Rembrandt Association (courtesy of its Titus Fund and its Post-war and Contemporary Art fund) and the Mondrian Fund. ‘Museum de Fundatie now has a fantastic, internationally unique presentation of work by one of today’s most important painters, and we are extremely grateful to participants in BankGiro Loterij, the Rembrandt Association and its Titus Fund, and the Mondrian Fund, for enabling us to enrich the collection of the museum, and of the Netherlands, in this way’, says Ralph Keuning, director of Museum de Fundatie. 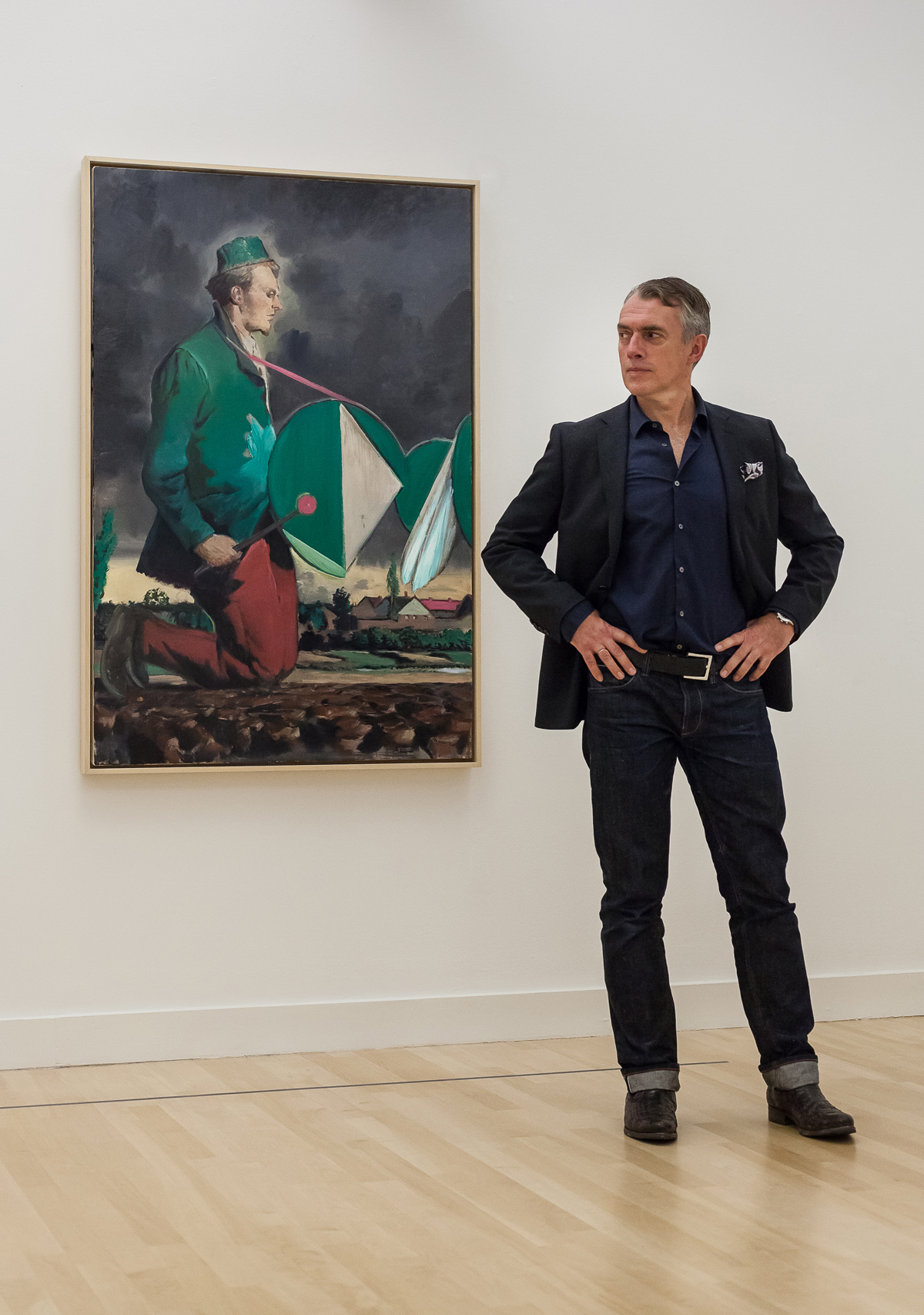 Neo Rauch
Neo Rauch (b. 1960, Leipzig) is a leading artist. He is from the generation of artists who grew up in the workers’ paradise of the GDR, yet are young enough not to be associated with its oppressive ideology. He represented Germany at the Venice Biennale in 2001 and the São Paulo Biennial in 2004. From 2005 to 2009 he was professor of painting at the Hochschule für Grafik und Buchkunst in Leipzig, which awarded him an honorary doctorate in 2009. As an exponent of the Neue Leipziger Schule (‘New Leipzig School’) he works in his own unique surrealist style, a virtuoso blend of tradition and modernity. He shows us the world as if we were in a theatre, a ‘theatrum mundi’, with sets of his own design and figures acting in a story that inextricably links history and current events. His collage-like compositions present a personal comment on the complexity of life in 20th- and 21st-century society.