Kasteel Het Nijenhuis is one of the best preserved manor houses in the province of Overijssel. It is situated between the villages of Heino and Wijhe in an area of great natural beauty. Its history begins in the late Middle Ages, the first record dating from 1382.

The Castle was occupied by various noble families bearing distinguished names such as Van Ittersum, Bentinck and Von Knobelsdorff. After the estate had been sold by the Van Pallandt family in 1934, it fell into disrepair. Collector Dirk Hannema managed to convince the Provincial Council of Overijssel, however, that Kasteel Het Nijenhuis should be kept from further deterioration. It was on his initiative that the Castle was restored and converted into an architect-designed museum, with Hannema’s own collection as the starting point. The founder of Museum de Fundatie occupied Kasteel Het Nijenhuis from 1958 to his death in 1984. Under the supervision of architect Gunnar Daan, the Castle was radically rebuilt and renovated in 2003/2004. The house, which until then could only be seen by appointment, was totally refurbished and has been fully open to the public since September 2004. 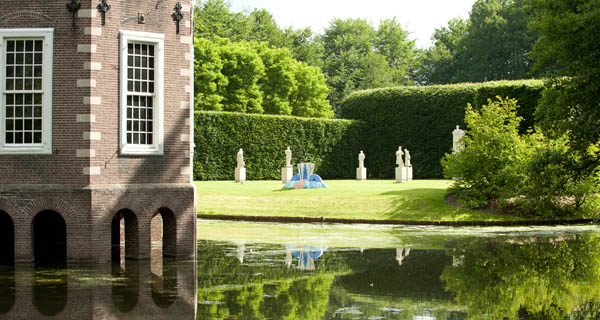 Hannema’s miscellaneous collection includes paintings, drawings, sculptures and applied art from many periods and cultures. Until his death in 1984, he organized exhibitions and gave people guided tours of his house and the Museum by appointment. Museum de Fundatie continues Hannema’s work and nowadays presents a part of his extensive collection in the Castle. In addition, temporary exhibitions are held with some regularity in the Castle and the statue garden. Further information is to be found under the ‘exhibitions’ and ‘collections’ buttons.
Kasteel Het Nijenhuis lies amidst attractive gardens with sculptures such as Charlotte van Pallandt’s ‘Wilhelmina’ and the Hildebrand monument by Jan Bronner.