The Paleis a/d Blijmarkt is Museum de Fundatie’s location in Zwolle. These neo-classicistic premises were erected between 1838 and 1841, based on a design by the architect Eduard Louis de Coninck from The Hague.

It served as the Palace of Justice and later housed the National Department for Town and Country Planning. In 2004/2005 the Paleis a/d Blijmarkt was converted into an art museum in accordance with a design by the architect Gunnar Daan.The museum was spectacularly renovated in 2012 and since 1 June 2013 open to the public. 'THE EYE’, or 'The cloud', is what the elliptically shaped superstructure on the roof is called by the Museum de Fundatie itself. But already numerous other nicknames are going around: 'the egg', 'the UFO', 'the Zeppelin' or 'the spaceship'.

The extension, a design of Hubert-Jan Henket, accommodates two exhibition rooms with a total surface area of almost 1,000 m². A large oval window offers a view of the historic inner city. On the outside the superstructure is clad with 55,000 white-blue tiles. Optically the expansion is lifted like a ceramic cloud, floating above the originally neo-classical building. Located where the medieval city centre borders on the 19th century avenues, the renovated Museum is a present-day beacon as well as an icon for the future. The new construction meets the demand for extra space for the successful sandwich of crowd pullers and specialist-oriented exhibitions. 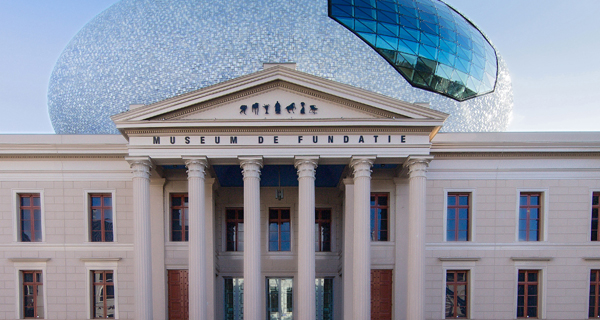 In conjunction with Kasteel Het Nijenhuis, the Paleis has been home to the Museum de Fundatie since June 2005. The ground floor accommodates an extensive selection of works from the Museum’s own collection of visual art, from the late Middle Ages to the present day. This collection was primarily amassed by collector Dirk Hannema (1895-1984; former managing director of the Museum Boymans in Rotterdam) and includes works by old masters such as Strozzi, Vroom and Weenix, international top pieces by Picabia, Turner, Bernini and Canova, and a large collection of Dutch art by artists such as Mondrian, Israëls, Toorop, Van der Leck, Appel, Lucebert, Voerman and many others. Temporary expositions are compiled regularly, and are displayed on the top floor.