Rob Scholte plays with copyright. For example in 1984 he featured the Philips logo in his painting Nachtlicht (Night Light). Later, with his paintings Utopia and Nostalgia, he joined an impressive list of famous artists depicting Olympia, including Giorgione, Titian, Manet and Ramos. In 1987 he painted a self-portrait as a ©-sign, giving him more or less the rights to this much used symbol. With the ‘Embroidery Show’, which will run in Zwolle from 28 April to 18 September 2016, Scholte adds a new dimension to his image rights narrative. Scholte will show his collection of almost 1000 embroidery works in Museum de Fundatie’s ‘de Wolk’, produced by an equal number of entirely anonymous masters.

Scholte started collecting embroidery in 2005 immediately after returning to the Netherlands from a long stay abroad. The artist trawls second-hand shops and car boot sales searching for embroideries, and in his own words "refuses to believe in the uninterested stupidity with which the Dutch favour Ikea prints over traditional, handmade embroidery. Work created anonymously, stitch by stitch by our mothers, grandmothers, great-grandmothers and great-great-grandmothers (and sometimes men), and done with so much devotion and patience in what scarce leisure hours they had. […] The yield of many long weeks, months and even years of hard toil are discarded so casually by today’s inheritors and keepers, for the sake of a couple of Euros.” 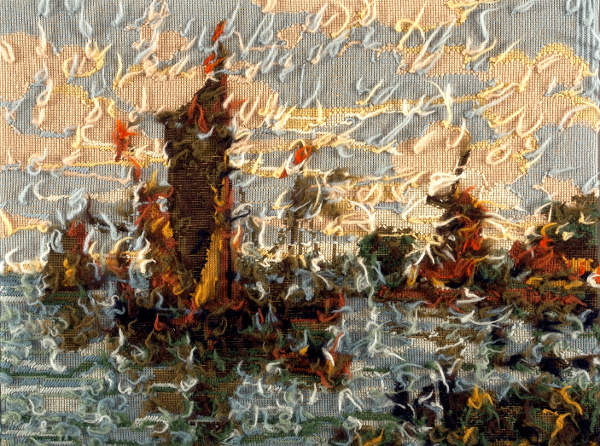 Scholte previously brought together Jan Sluijters’ war images , which were exhibited and purchased by Museum de Fundatie in Zwolle in 2014, to draw attention to this underexposed part of Sluijters’ oeuvre. With his Intarsia series, part of the ‘Silk Cut’ exhibition in Kasteel Nijenhuis in Heino in 2011 and which can now be viewed in the Rob Scholte Museum in Den Helder, Scholte places the work of mostly little-known makers in the spotlight. Currently, Scholte believes it is his mission to give the Embroidery works the kind of recognition they deserve. Scholte observes that the embroidery particularly comes alive on the rear of the pieces, with their often rough finishing. He therefore chooses to frame the works back to front, and present these unchanged to the public. Scholte adds his signature, which in current art circles immediately raises the value of the Embroidery.

Scholte observes that the embroidery particularly comes alive on the rear of the pieces, with their often rough finishing.

On the embroidery’s rear, which in Scholte’s case is now the front, the yarn is in a state of random flux, or so it would appear. This is without aesthetic ambition, fed by a certain thriftiness perhaps, or the reluctance to cut off the yarn properly; all of which contribute to the final form. Sometimes there are thick knots, or very long threads, then again on occasion the rear is as neatly finished as the front. On the rear side you are invited to witness the struggle required to make the front as beautiful as possible. As a viewer, these until now hidden rear sides offer a privileged glimpse into the level of intense work required, as well as revealing the true character of the makers. According to Scholte, their dedication is a clear indication that they are extremely devoted to art and in particular to the image they have chosen to represent.

Scholte categorises and logs these expressions of national history in series and themes. These works, which until now were unseen in museums, now line the atrium and the third and fourth floor of Museum de Fundatie’s recent extension. Scholte aligns familiar images of paintings by old masters, including Rembrandt, Vermeer, Fragonard, Millet and others, with lesser known images of animals, portraits and landscapes. Quite remarkable are the hunting scenes and the seascapes Scholte previously presented as a posthumous ‘farewell’ exhibition for Jan Hoet in the James Ensor Museum in Oostende.